Most "name" hair salons have a seven-year life cycle. THE PIERRE MICHEL SALON, established in 1967, is the exception to the rule. There are many
reasons for this. "The single most important secret to our longevity is our ability to re-invent ourselves. Fashion changes, trends occur. We sometimes anticipate them. We always move with them" explains Michel Obadia, one-half of the dynamic partnership behind Manhattan's exclusive PIERRE MICHEL SALON.

After almost 40 years, the salon opened by childhood friends Pierre Ouaknine and Michel Obadia continues to be a magnet for celebrities, socialites,
fashionistas and trend-setters. Both Pierre and Michel are in the salon every day. PIERRE MICHEL now occupies a two-stories and 8,000 square feet of
prime Manhattan real estate, on 57th Street, between Park and Lexington Avenues. Haircut, color, makeup and other services are synchronized to create total, customized looks as individual as the clients themselves.

"We understand that not everyone is ready to jump into a new look" comments Pierre Ouaknine. "Consequently, we ease our clients into their next hair
breakthrough with care, understanding and insight. This has been a winning formula for PIERRE MICHEL. Our 115 stylists, colorists, estheticians, makeup artists and manicurists are keenly interested in their clientele's individual personalities, preferences and professions. This enables our staff to determine the look best suited to each client's way of life.”

A recent article in The New York Times told of the dissatisfaction New York women feel with respect to many upscale midtown salons. Hefty prices, coupled with formulaic approaches to beauty, leave much to be desired, these ladies say. Some, the newspaper reported, actually travel miles from home to obtain acceptable beauty services, at a fraction of the price of the "name" salons.

THE PIERRE MICHEL SALON is the perfect antidote to such feelings of frustration. Whether teenager or tycoon, mother or model, glamour girl or
grandmother, artist or actress, every woman (and man) who visits PIERRE MICHEL feels special, pampered and unique, no matter how extensive or limited the services they elect to have. And that's not all. Clients are coached on how to maintain their new look at home, with hair and makeup products available from PIERRE MICHEL.

"With our 'downtown' chic and uptown sensibility, we are equally appropriate for debutantes and grande dames," note Pierre and Michel. "That's why three generations of customers find THE PIERRE MICHEL SALON a rewarding and relaxing experience. Our highly trained staff utilizes state-of-the-art techniques, in our luxurious setting. Amenities include a blue tiled, calming shampoo room, a VIP area for clients desiring complete privacy and a cappuccino bar, serving complimentary coffee and light cuisine. In addition, a skylight conservatory overlooking the colorists' stations permits natural light to enter the space, which insures an accurate appraisal of a client's hair color." 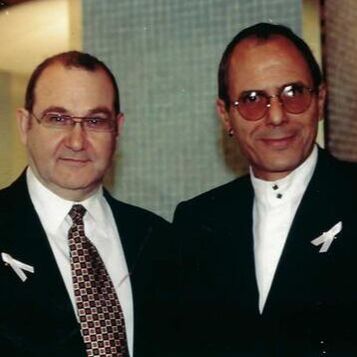 ​"I became a hairdresser because I like women and enjoy creating beauty," Pierre Ouaknine, co-owner of THE PIERRE MICHEL SALON, grins. "Also, it seemed a good way to learn English."

One of a dozen children, the Ouaknines emigrated from Casablanca to New York City in the mid-Sixties. Pierre never envisioned then, at the age of 15, that he and his childhood friend Michel Obadia would wind up working at the same popular New York hair salon ten years later; and that in 1967, the pair would found one of the hottest, most enduring salons in America.

But that's jumping ahead...

Once in the U.S., Pierre found employment with the salon that ultimately joined forces with the house of Revlon. Thanks to an introduction to the Creative Director of ad giant DDB Worldwide, the young stylist found himself doing sittings for fashion magazines as well as television commercials and print ads. "The top models kept requesting me," he says simply. Pierre quickly became part of an elite group of hairdressers whose work styling models, magazine editors, celebrities and advertising campaigns was widely publicized. Beyond this, he worked closely with the incomparable ballet master George Balanchine, as head stylist for the company and its feature films, notably, A Midsummer Night's Dream, starring principal dancers Suzanne Farrell and Patricia McBride.

"Talent attracts talent," Pierre continues. "The beauty business is a lot like show business. Every day is a new performance. Our clientele -- the 'audience' -- expects a brilliant performance. That's, in part, why we continually re-invent ourselves. We want to make sure that THE PIERRE MICHEL SALON provides the very best beauty services available anywhere.”

"Like Pierre, I constantly look for ways to recycle myself mentally, emotionally, professionally, artistically and technically. Our salon reflects this. Hairdressing is a portable craft. You can pack your comb and scissors and perform your art anywhere in the world. That flexibility is, in part, what keeps our profession so dynamic. It was also one of the many reasons I decided to become a stylist."

At 17, Michel left his native Morocco and moved to Paris. His talent was unmistakable. He possessed an exceptional degree of skill and a fashion-forward eye. For Michel, every cut was a "custom cut." He mastered them all. Predictably, the young stylist was embraced by some of the biggest salons in Paris. Ultimately, however, Manhattan beckoned.

"You could say I was well groomed," he comments, blue eyes twinkling.

Pierre and Michel were destined for triumph. After seven years of success in their first location on West 57th Street, a compelling offer from Donald Trump persuaded them to move across the street to the newly renovated Trump Towers. There, PIERRE MICHEL established itself as one of the country's first high-tech salons, offering innovative and highly advanced beauty services, including exclusive color correction and hair repair techniques.

Over the ensuing ten years, the salon's premier staff continued to deliver breathtaking looks for the glitterati and New Yorkers in the know. An ever growing client base and expanding horizons led PIERRE MICHEL to its third location: the two-story 8,000 square foot space it presently occupies.

Although vast, the salon is friendly; posh, yet inviting. PIERRE MICHEL caters to a clientele that demands the best and finds it there.

Pierre Ouaknine and Michael Obadia are true visionaries. After almost four decades in business, their salon remains as fresh and as hip as the day it first
opened its doors.